Hwalan played Sgt. Chang, a suicidal combat veteran with PTS struggling to re-integrate into civilian society.  Hwalan co-created the arc, character, choreography and script through interviews and in collaboration with veterans, who were an integral part of the work.  The second half of the piece involved improvisation with the audience, comprised of combat veterans from Korea, Vietnam, Iraq and Afghanistan, as well as public policy makers, family members of the military and civilians.  Veterans consistently thought Hwalan was a veteran herself, often asking when she served.  Both male and female veterans identified with Hwalan’s portrayal.  Veteran’s Project: Leaving Theater consistently received invitations for repeat performances. 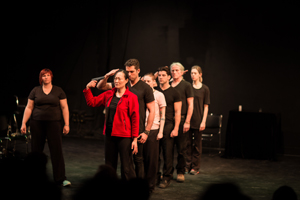 “Hwalan… I am so delighted and awed to be able to work with you.  You make me tremble.  That is a compliment. You make my nerve endings and muscles and bones tremble in grief and despair and the glory of extraordinary art…. I often think about what it means to be alive. I do not have an answer but direction. It means beauty. It means the pursuit of excellence. It means integrity, a pulling together not only of our longing as individuals but for our common humanity. All these I experience from you. All these I learn from you. I am deeply grateful.”
-Everett Cox, Vietnam Veteran

“[Hwalan], I can’t forget that performance, how you made my words and feelings come to life that night. I owe you a great deal of thanks.  I feel like I am the person I am now because of that moment. It was a huge moment of opening myself to the universe.  I’m glad you’re in this world.”
-Nicole Goodwin, Iraq Veteran

“I just had a phone call from a Viet Nam vet who saw our performance today. He told me, in ten different ways, it was shocking. Then he thanked me ten different ways… He said ours is just the message the public needs to see and hear and vets need to be reminded of. He was a medevac crewman. He describes his tour of duty of being ankle deep in blood for 12 months. He wore his hat the whole time today. What’s beneath it is a bulls eye tattooed on the back of his head. Lots of vets have them, even if they are invisible. When he says thanks, he says thanks for millions of vets.”

“The Veterans’ Project: Leaving Theater” at the Warwick Arts Festival on July 23 was part play, part veteran-civilian dialogue, part participatory drama—theater in its richest sense…Alice Chang (Hwalan Shub), the main character, turns to drugs and alcohol to numb herself, and a bar brawl lands her in jail. She spirals downward until she contemplates suicide. At that point, Simpson stops the play to ask, “What is happening here? Are there any places along the way when this might have turned out differently?”…The actors, staying in role, replied extemporaneously with great skill.” (Makofkse)

“Underlying an emotionally riveting performance by actors, both Veterans and civilians, men and women, the key question is how do you (as a Veteran) want to be understood by those who seek to help or bridge that unique experience for those who served, and society, who they pledged to protect.” (Harbors)