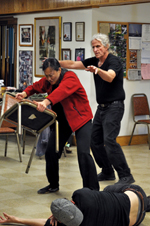 The action begins with combat, an attack that wounds one soldier, and moves through the alienating process of being mustered out, into the isolation, anxiety, and anger that often plague vets. Alice Chang (Hwalan Shub), the main character, turns to drugs and alcohol to numb herself, and a bar brawl lands her in jail. She spirals downward until she contemplates suicide. At that point, Simpson stops the play to ask, “What is happening here? Are there any places along the way when this might have turned out differently?”

Audience members, some veterans, some civilians, offered suggestions, and Simpson invited them to enter a scene as a character and “re-write” the lines. Members of the audience stepped up to the challenge. One woman, taking the role of a counselor who had not connected with the troubled vet, gently said, “You look so…unsettled. What can I do for you?”

The actors, staying in role, replied extemporaneously with great skill. Brenna Palughi, playing a soldier who lost her leg, when asked if she might have reached out more to Chang, said, “You got to be able to take care of yourself before you can take care of someone else. It’s that air mask thing.”

The staging of the play gave it a feeling of dance:  a marching sequence, the combat scene, the bar fight, the last scene when Chang’s comrades line up behind her saluting as she raises a weapon to her head. In a unique twist, the times the vet lost control were done in slow motion, rather than the expected swift action of violence.

The last component was a brainstorming session on changes that would make veteran re-assimilation easier.

Breaking down the wall between actors and audience, “Leaving Theater” provides a moving experience for veterans and civilians. The play will be at the Veterans Mental Health Coalition of NYC on Friday, Sept 12, 2014 and at the Wallace Center of the FDR Presidential Library on Sun, Nov 23, 2014. Anyone interested in arranging a production may contact Fay@lucidbody.com.